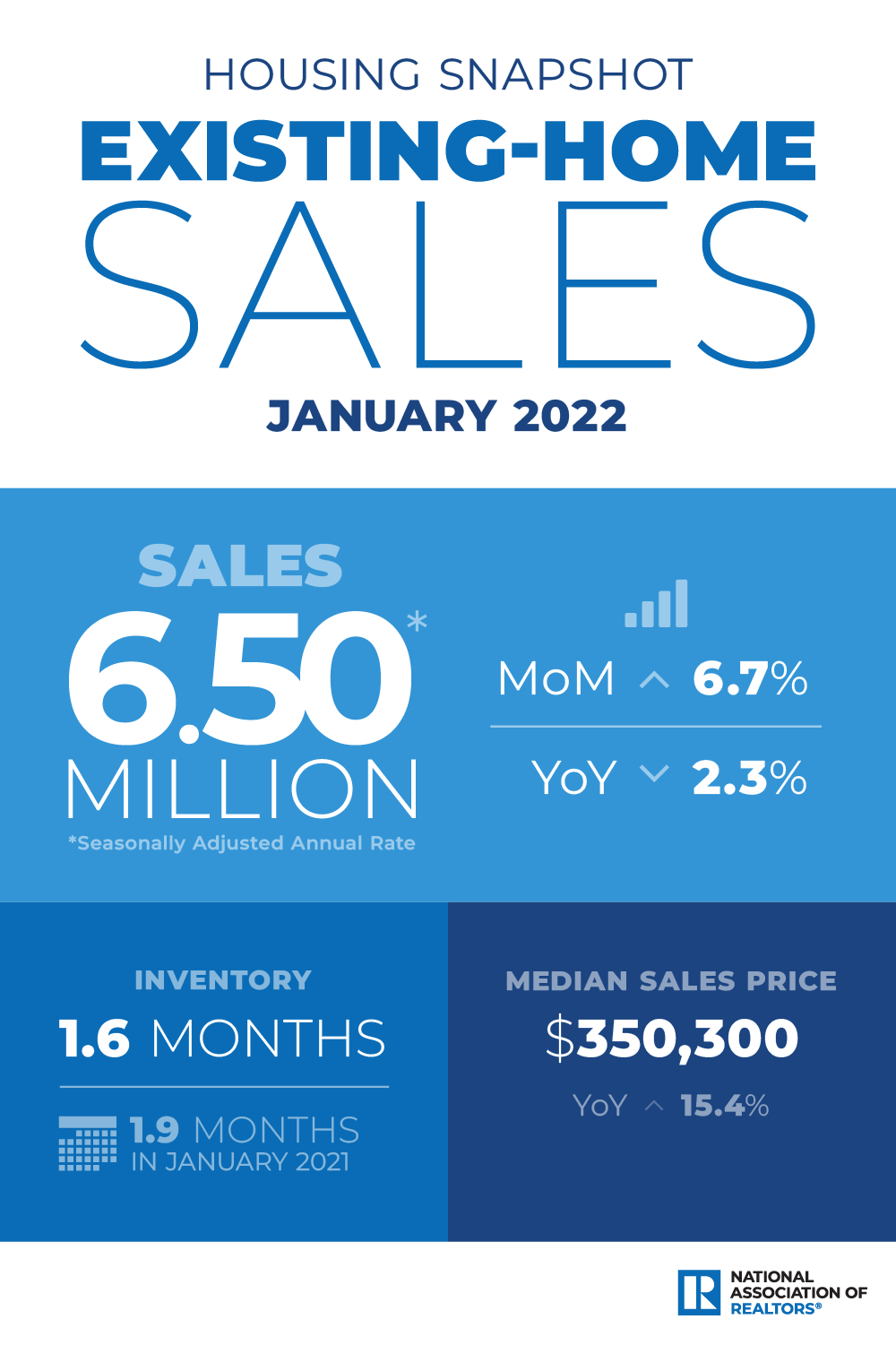 After swinging to a decline in December, existing-home sales surged into positive territory in January, while the inventory of unsold homes fell to a historic low, the National Association of REALTORS® said.
Total existing-home sales, which are completed transactions, including single-family homes, townhomes, condominiums and co-ops, jumped 6.7% from December to a seasonally adjusted annual rate of 6.5 million in January. Year over year, sales were down 2.3% from 6.65 million transactions in January 2021.   The median existing-home price for all housing types in January was $350,300, up 15.4% from January 2021, as median prices rose in each region.   Total housing inventory at the end of last month stood at 860,000 units, down 2.3% from December and down 16.5% from a year earlier. January’s unsold inventory represented a 1.6-month supply at the current sales pace, down from 1.7 months in December and 1.9 months a year ago. “Buyers were likely anticipating further rate increases and locking-in at the low rates, and investors added to overall demand with all-cash offers,” NAR chief economist Lawrence Yun said in a press release. “Consequently, housing prices continue to move solidly higher.” Yun expects existing-home sales to slow for certain buyers in coming months as mortgage rates continue to rise. Many moderate-income buyers who barely qualified for loans at lower interest rates will be priced out, as will buyers in expensive markets, where the increased rates will mean an additional $500 to $1,000 in monthly payments. Properties typically remained on the market for 19 days in January, flat compared to December and down from 21 days in January 2021. Seventy-nine percent of homes sold in January were on the market for less than a month. By property type, single-family home sales rose to a seasonally adjusted annual rate of 5.76 million, up 6.5% from 5.41 million in December and down 2.4% from a year earlier. The median existing single-family home price was $357,100, up 15.9% on a year-over-year basis.   Existing condominium and co-op sales came in at a seasonally adjusted annual rate of 740,000 units, up 8.8% from 680,000 in the previous month and down 1.3% compared to December 2021. The median existing condo price rose 10.8% year over year to $97,800. “The market is still thriving as an abundance of home sales took place in January,” NAR President Leslie Rouda Smith said. “We will continue to beat the drum for more inventory, which will give buyers additional options and will also help alleviate increasing costs.” In January, first-time buyers were responsible for 27% of sales, down from 30% in December and down from 33% in January 2021, while individual investors or second-home buyers, who make up many cash sales, purchased 22% of homes, up from 17% in December and 15% in January 2021. By major U.S. region, sales of existing homes jumped 9.3% on a month-over-month basis in the South, while they rose 6.8% in the Northeast and 4.1% in both the Midwest and West.