Continued disruptions in the supply chain crimped the pace of new-home construction in October, as single-family starts fell 3.9% month over month to 1,039,000, according to the U.S. Census Bureau and the Department of Housing and Urban Development.

Year over year, single-family starts were up 0.4%. 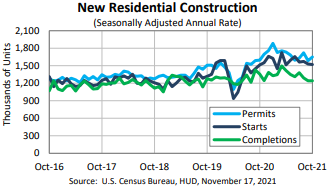 The pace of multifamily construction was up 6.8% compared to September and 39.5% compared to a year earlier, with 470,000 units started.

Altogether, the pace of single-family homes and buildings with five or more units was down 0.7% month over month to 1,520,000 units. Starts were up 0.4% compared to a year ago.

“September new-home sales figures were strong, which reflects market optimism and indicates that once materials and labor become readily available, we are likely to see a similar surge in starts,” RCLCO Real Estate Consulting principal Kelly Mangold said. “Heading into winter, it is likely that activity will be more robust than is typical for the holiday season.”

The seasonally adjusted annual rate for privately owned housing units authorized by building permits was at 1,650,000 in October, up 4% from September’s revised rate and up 3.4% compared to October 2020. 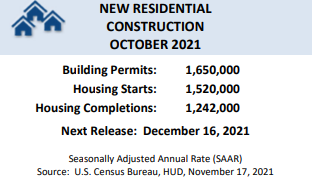 Privately owned housing completions hit an annual rate of 1,240,000 in October, unchanged from September’s pace and down 8.4% from a year earlier.

By region, single-family new construction activity was down across the board, led by the Northeast, with a 15.2% drop, followed by the Midwest, with a 7.5% slide, the West with a 4.2% decline and the South with a 1.8% decrease.

“We have underbuilt new housing relative to demand for years,” First American Deputy Chief Economist Odeta Kushi said. “Building will have to exceed household formation for some time to reduce the housing stock ‘debt’ we have accumulated. If you build it, they will buy it, and builders are taking heart. With demand for new homes still high, homebuilder confidence in the market for single-family homes rose in November. Yet, headwinds remain.”