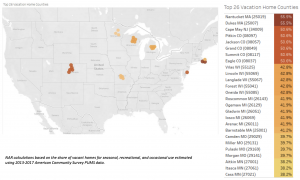 Map provided by the National Association of Realtors

A booming economy and low mortgage rates helped boost the median sales price of vacation home counties across the country in 2018, according to a study by the National Association of Realtors.
Areas are declared “vacation home” counties when 20 percent or more of the housing stock is used for recreational, vacation or seasonal purposes. Of the 3,141 counties in the U.S., 206 – 6.6 percent – are considered vacation home counties.
“Some people may visualize the common popular vacation destinations in the U.S. when considering a vacation home, such as counties in Florida or California,” Lawrence Yun, NAR’s chief economist, said in the report. “And although those locations have their share of vacation properties, we see that some homeowners prefer some of the other counties, including those in Massachusetts and New Jersey. These areas are often known for harsh weather conditions but are popular nonetheless.”
The median price for these vacation spots increased 36 percent between 2013 and 2018, slightly higher than then 31 percent increase reported for existing and new homes sold during the same time period in non-vacation counties?.
Nantucket and Dukes counties tied for having the largest percentage of vacation, seasonal or recreational homes, with 55.5 percent of the homes vacant for part of the year. Barnstable County also was in the top 26 counties for percentage of vacation or seasonal homes at 41.2 percent.
Those three counties also were among the top 25 most expensive vacation home counties, based on their median sales price of $1 million for Nantucket – the most expensive in the nation – Monroe at $477,136 and Barnstable at $288,816.
Perhaps unsurprisingly, they also were identified as the least affordable, with Nantucket registering an expected monthly mortgage payment of $12,884 and a mortgage-to-income ratio of 59.4 percent. For Monroe, the average monthly mortgage payment was an estimated $6,147 with a mortgage-to-income ratio of 26.7 percent.
But there’s some good valuation news to go along with that cost, too; Nantucket also had the fourth highest appreciation rate in the country at 122.2 percent.