Expect a stable housing market over the next five years — despite the expiration of COVID-era protections — says a new Zillow report.

The Zillow Home Price Expectations Survey, fielded by Pulsenomics, surveyed 111 housing experts throughout the month of August. The panel included economists, researchers, analysts and academics. And their insight reveals some hopeful predictions.

Since the pandemic began in 2020, housing inventory was outpaced by record-high demand. The ability to work remotely, in turn, spurred a “Great Reshuffling,” especially to exurb communities. Coupled with low interest rates, the market was quickly oversaturated with buyers. Inventory, meanwhile, stalled. New construction also slowed under the weight of supply-chain issues, caused by the ongoing pandemic. The overall lack of supply contributed to sky-high home prices, which reached an annual appreciation of 17.7% in August.

But now, inventory is on the rise again. As vaccinations became widespread during the spring of 2021, more homeowners felt comfortable listing their properties. And by August, Zillow reported a fourth-consecutive monthly increase in inventory. With competition easing, Nicole Bachaud, a Zillow economic data analyst, explained, “This is welcome news for many potential buyers, who should see more options to help their home search. Along with the expected moderation of price appreciation in coming months, the market is beginning to shift toward a balance between buyers and sellers — although that middle ground is still a far way off.”

Pulsenomics founder Terry Loebs also commented on that shifting of the market. “The silver lining for aspiring homeowners is that the worst of the housing supply crunch looks to finally be behind us, and most experts believe that the past year’s rapid price boil has begun to simmer down,” he said.

This influx of homes on the market arrives, distinctly, at the end of the federal eviction and foreclosure moratoriums. The Centers for Disease Control had put an eviction moratorium in place back in March 2020; it was then extended throughout much of 2021 until being struck down by the U.S. Supreme Court in late June. The moratorium ended in late July, and the federal moratorium on foreclosures expired July 31.

However, according to the Zillow Home Price Expectations Survey, evictions will likely make up the smallest share of new housing inventory. Panelists believe the largest single source of available housing will arise from existing homeowners simply moving. As large swaths of homeowners exit forbearance plans, necessitated by the pandemic, this is especially likely, according to the report. “Now with more confidence in their long-term housing decisions, we are seeing existing homeowners finally returning to the market as sellers, who will provide the largest chunk of for-sale inventory in the next year,” Bachaud said. This particular scenario is expected to make up 39.7% of the available supply over the next year. 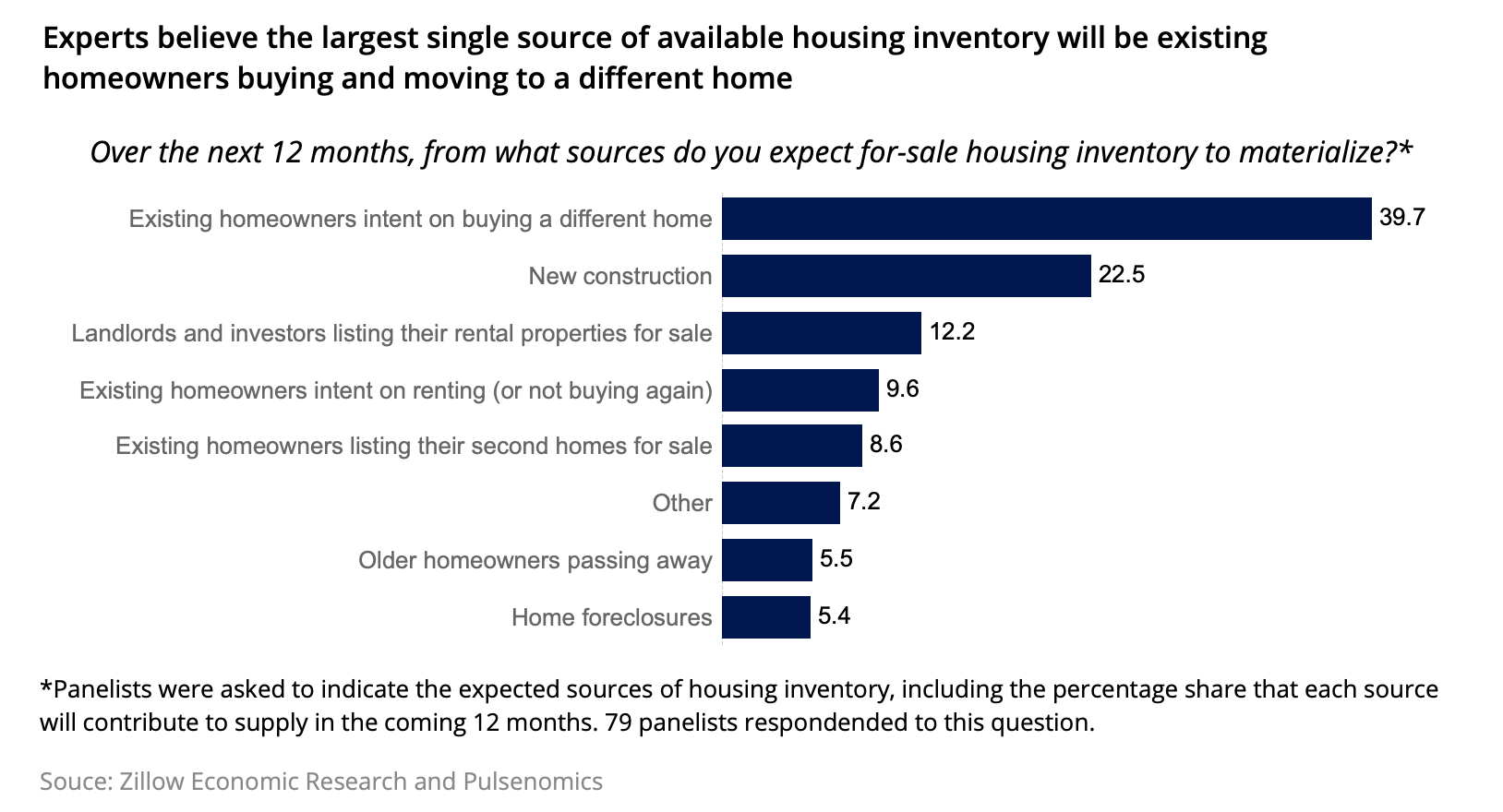 This still leaves, of course, the question of foreclosures and evictions. Despite the end of the foreclosure moratorium, the Zillow survey panelists predict that home foreclosures will make up just 5.4% of the upcoming housing inventory: the smallest percentage. In Illinois, though, it’s worth noting that a spike in foreclosures is already evident. Illinois had the highest foreclosure rate in the nation this August, according to data from ATTOM’s U.S. Foreclosure Market Report. Among larger metros, Chicago’s foreclosure rate was the third-highest nationwide.

As for renters, Zillow projects evictions to occur at 1.5 times the pre-pandemic rate in the wake of the moratorium. Zillow estimates more than 485,000 evictions will be filed in September and October of this year, with a projected 268,000 people evicted: about 0.6% of total U.S. renters. Then again, the exact number of evicted renters will depend on the effective distribution of federal relief funds. According to the U.S. Department of the Treasury, just $5.1 billion of the $46.5 billion of rental relief had been distributed locally by Aug. 25.

Although a significant number of people are being affected, the experts appear fairly split in predicting how the moratorium’s end will affect rent costs. The majority, though, do not foresee a change in rent: 34% of panelists. Meanwhile 26% expect rents to rise slightly, 20% say rents will rise modestly and 14% think rents will fall somewhat. Just 6% predicted rents to rise significantly.

Projected home prices, on the other hand, had a more certain consensus. Considering additions of housing inventory, the experts surveyed predicted a cumulative 31.8% price increase through 2025: equivalent to a 5.7% increase annually. And while that’s still significant, it’s well below the current annual appreciation of 17%. Stabilization appears imminent.