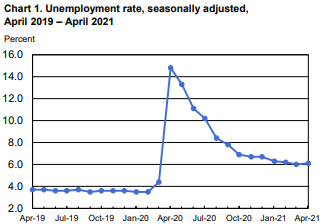 Nonfarm payroll numbers in the U.S. rose by 266,000 in April, the U.S. Bureau of Labor Statistics said, reporting a level that significantly missed an industry consensus estimate of 978,000 new jobs.

Reuters attributed the miss to shortages of workers and raw materials.

The employment numbers for March were revised down as well. The most recent data indicate a 770,000 increase in jobs for the month, compared to the previously reported increase of 916,000.