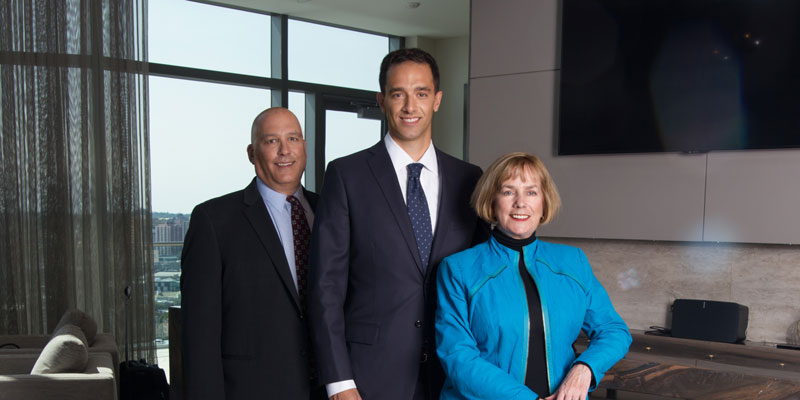 With over 60 years of combined experience, the team of three at loanDepot has made a name for itself in greater Boston’s real estate market. When buying or refinancing a home, the loan product a person chooses can make or break his or her financial future. This is what makes Senior Loan Officer and Branch Manager Rosella Campion describe her job as being a “puzzle solver and solution seeker.” It’s why Senior Loan Officer Jason Evans takes pride in clients recognizing the team’s great customer service. And it’s what makes it so meaningful for Senior Loan Officer Peter Hurwitz to see “clients now sending their kids to me because of the trust and relationships we’ve established throughout the years.”

Campion, Evans and Hurwitz have succeeded in the industry both as a team and as individuals. Campion was ranked in Scotsman Guide’s Top Originators 2016 for Top Dollar Volume. Evans helped more than 300 homeowners with mortgage financing in 2016, which made Banker & Tradesman rank him as one of the top 10 loan officers in Massachusetts based on production. And Hurwitz was recognized as a member of the loanDepot All Pro 2017 Team, an honor he’s received every year since 2009. The team’s strong work ethic and ability to guide, support and educate clients throughout the homebuying process has made it stand out. “Clients hug me and thank me for my support and guidance with one of their most important life decisions. Helping them own a home is really the largest step I could take. I love making people smile,” Campion says.

The team entered the real estate industry on different paths. Before working in real estate, Campion worked on 7th Avenue in New York City’s Garment District in wholesale for fashion brands such as Christian Dior. “After getting married, I looked for a job that would allow me to ‘run a business’ without having to put up the capital like a startup would. Real estate allowed me to make that transition from the New York City fashion world to serving Boston-based clients in a loan officer capacity,” Campion says.

Hurwitz was a real estate broker specializing in condominiums and co-ops from 1981 to 1989, and has been a lender since 1989. “I had a ‘specialized segment’ in my real estate career. My skill set was well-suited for lending and the mortgage industry, so I made the leap. It’s been the best career decision I could have made,” he says.

Evans went straight into the mortgage industry three weeks after graduating college in 2005. He attended Bentley College, where he earned his bachelor’s degree in economics and finance and was was a varsity student athlete and captain of the cross country team his senior year.

This team of three is involved with several real estate organizations, such as Greater Boston Association of Realtors. In his free time, Hurwitz enjoys spending time with family, boating, fishing and taking his two Labrador Retrievers on long walks.

Evans enjoys spending time with his wife and their 4-year-old daughter and 3-year-old son. A big fan of Syracuse Orange basketball, the Boston Celtics and the New England Patriots, he’s also an avid basketball player and competitive runner.

Campion recently took up golf, which she says is like a metaphor for life. “When I first started, I did not keep score, but only focused on the right shots I made. If you imprint on your brain what you did right, and not focus on what you did wrong, you eventually learn to do it better,” she says.